In the main theme hymn for the feast of Theophany we sing:

When You, O Lord were baptized in the Jordan,

The worship of the Trinity was made manifest.

For the voice of the Father bore witness to You

And called You His beloved Son. 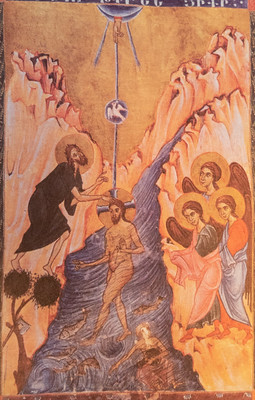 And the Spirit, in the form of a dove,

Confirmed the truthfulness of His word.

O Christ, our God, You have revealed Yourself

And have enlightened the world, glory to You!

At the baptism of Christ, the Holy Trinity is revealed to us – the voice of the Father, the Spirit in the form of a dove, and the Son of God incarnate in the River Jordan.  New Testament scholar Vincent Pizzuto (author of the really fine book, Contemplating Christ: The Gospels and the Interior Life) comments:

“John [the Evangelist] does not tell us in the beginning was silence but that “In the beginning was the Word.” Yet what is the Word but “the ecstasy of silence,” as Panikkar has said.  From the Greek ekstasis, the term means literally “to be or stand outside of oneself,” or “to go elsewhere from oneself.” The Word is the eternal silence of God overflowing outside of the Godhead. Yet to speak one must simultaneously exhale. A word cannot be spoken without the breath that carries it. 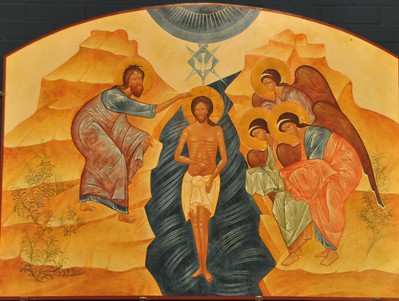 And here we encounter again the mystery of the Trinity and the role of the Spirit in the life of Christ. Is it not, after all, the breath of the Spirit that carries the eternal Word across the threshold of time in the incarnation (Luke 1:35)?  Is it not the breath of the Spirit that carries the incarnate Christ from death into life in the resurrection (Rom 8:11)? By the power of the Spirit, the Word is eternally spoken from the silent abyss of the Father and returns to the bosom of the Father (John 1:18)—not infinitely, but eternally, not time after time without end, but once for all time without end.  The Word through whom the universe was born is now born within the universe itself.”  (Kindle Loc 1474-1484) 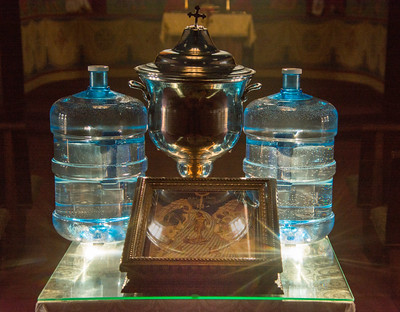 The Holy Trinity is not revealed to us in some distant inaccessible heaven, but rather the theophany occurs on earth, in history in the waters of the river Jordan.  That revelation is celebrated and made available to each of us at the Feast of Theophany and in every baptism in the church, including our own.  The mystery of God is that divinity is revealed to us in history and in creation.

Wishing you a blessed Feast.

“And confer upon this water the grace of redemption, the blessing of the Jordan. Make it a source of incorruption, a gift of sanctification, a remission of sins, a protection against disease, a destruction to demons, inaccessible to the adverse powers and filled with angelic strength. That all who draw from it and partake of it may have it for the cleansing of their soul and body, for the healing of their passions, for the sanctification of their homes, and for every purpose that is expedient. For You are our God, who renews through water and Spirit our nature grown old through sin.