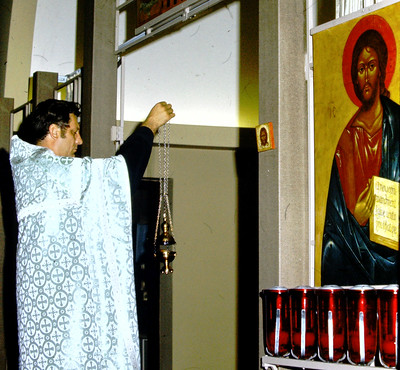 Growing up in the Orthodox Church, I frequently heard about the unchanging nature of Orthodoxy.  This idea was often applied to our liturgical practices and used to defend or justify practices which seemed to lack purpose any more.  Doesn’t matter since Orthodoxy was unchanging, liturgical baggage had to be continued because it had become part of Orthodoxy.  The mindset is very conservative, saying the current practices cannot be changed.  [If you ask many Orthodox why they do a particular liturgical practice, often you will get an explanation that tells you when the practice originated in history. The answer will tell you why the practice was adopted in the 14th Century, but doesn’t tell you why we are still doing it today.  If you ask Orthodox why bishops dress with a miter and Byzantine vestments, you might learn that many of these things were imposed by the Turks on the Orthodox when the Byzantine Empire was conquered by the Ottomans.  But that doesn’t explain why Orthodox who were never under the Ottomans feel they have to wear vestments which were to remind the Orthodox that they were conquered and part of the dhimmi.  Nor does it say why Orthodox today continue to follow this practice.  Why not resort to more ancient practices or practices which better reflect the Orthodox understanding of liturgy and the Body of Christ?] 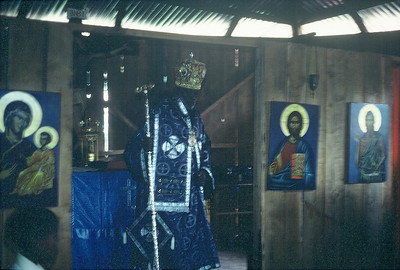 Some church historians note that Orthodox conservatism and refusal to change had hardened over time, but didn’t represent the attitude in the early centuries of Orthodoxy.  In fact, many historians of liturgy would say early Byzantium and Greek Orthodoxy were the sources of much liturgical change and innovation as compared to other ancient Christian traditions.  The static attitude of the past few centuries is thought by some to be more related to the huge social and historical upheavals the Orthodox experienced – the Turkish conquest of Byzantium and the more recent Bolshevik revolution in Russia.  As events beyond their control took over the lives of Orthodox, the Orthodox tried to preserve their past even by petrifying things liturgically.  My dogmatics professor from seminary, who was himself quite traditional, used to say the church becomes reactionary only in times of decadence.  When the church is healthy, it is alive liturgically and allows the liturgy to change in order to best reflect eternal truths to the current generation.  Thus for him, the liturgically conservative attitude grew because the Church itself was decadent and weak.

These thoughts came to my as I finished reading Liturgy and Architecture by Louis Bouyer.  Bouyer, a brilliant Roman Catholic scholar, was writing in 1967 in the aftermath of Vatican II.  The Roman Church was just beginning its liturgical upheaval and Bouyer was writing to offer some guidance to the Church about liturgical change and the architecture of the church building.  He had a rather favorable impression of the Orthodox Church.  And he like many historians pointed out that of all the ancient Christian traditions, the Greek Byzantine tradition in its earlier centuries were very creative and innovative in changing the liturgy to reflect its true purpose.  He notes the Byzantine architects got it right in abandoning the basilica as the normative shape for a church building.

“When this has been understood the first thing which must be evident is that the temple, which is to house the church congregated into one, with the living Christ in the midst of her, should tend to create such a conjunction, or at least have nothing which can be a hindrance to its achievement.  Whenever it is possible all those relics of the basilica which tend to divide the congregation into separate blocks – those who are in the nave and those who are relegated to the aisles, and where there is a transept those members who are in both parts of the transept – should be discarded by architects, as they were discarded by the first Byzantine builders.” (pp 92-93) 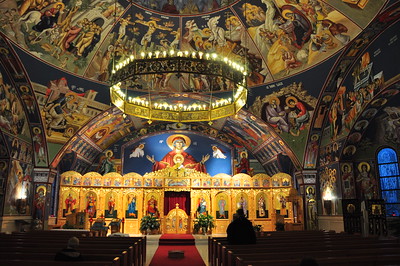 The church building for Christians is to help us experience a community in which the living Christ stands in her midst.  And the people are one Body.   The church building is the place where we experience the intersection and interfacing of heaven and earth, the divine and the human, the spiritual and the physical, the angelic and the secular, the living and the dead, saints and sinners.  All comes together in Christ and is bound together by Christ.  The building is to help us experience this healing and reunification of all that had become alienated and separated and divided by human sin.  The building as well as the liturgy should help us experience the union of all in Christ.  “For as many of you as were baptized into Christ have put on Christ. There is neither Jew nor Greek, there is neither slave nor free, there is neither male nor female; for you are all one in Christ Jesus” (Galatians 3:27-28).

Bouyer describes the ancient Byzantine Orthodox as leading the way for changing things liturgically and architecturally to make the building and the liturgy our main means for experiencing the unity of all in Christ.

“If we only realize the pattern of worship which these different forms all tried to embody, we are today as free as were the great Byzantine architects to invent new forms for our own times, as long as they will prove as well adapted to their purpose as those of the past.” (p 87)

Orthodoxy was not in its heyday intransigent and ossified, but was vibrant and making liturgical changes to help it fulfill its ministry.   The unity of all of the people of God was a main purpose of both liturgy and church building.  The shape of the building itself was to foster community, not division. 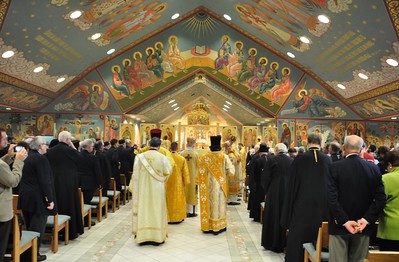 What Bouyer describes as the liturgy of the early church is an effort to overcome all divisions and to unite all the people into one Body.  The clergy weren’t praying on behalf of the people or for the people, but with them.   All were praying together.  As Bouyer describes it the bishop or presiding clergy really stood in the midst of the congregation and led the liturgical motions, which the people also did with the presiding celebrant.  [For example, when the celebrant said, “let us lift up our hearts” and raised his hands in prayer, so did all the people.  The clergy was neither acting on behalf of the congregation nor telling them what they should be doing.  The clergy did what everyone then also did.]   The clergy don’t give the people a blessing, but only pronounced God’s blessings on all.  The clergy need the blessing as well.  The clergy didn’t have power the rest didn’t but claimed and proclaimed what was common to all.   The clergy didn’t act on behalf of the people (in place of them) but only with them.  The clergy were part of the community and could act as clergy only within the gathering of people.  The presiding clergy weren’t busy with all kinds of liturgical priest craft that the people didn’t participate in, but rather, for the sake of order led the prayer that all were saying with the clergy.  All the people were engaged in the same action (liturgy means common work of the people) of submitting themselves (community) to God.  They were being transformed from being individuals into being members of the the Body of Christ.  All are co-workers with the clergy and Christ.  We become Christ in the Body as community not as individuals.