St Gregory of Nyssa connects the parable of The Prodigal Son to the Lord’s prayer as both bring us to think about God as our Father.

These words I think have a very deep meaning.  They remind us of the homeland we have abandoned, of the citizenship we have lost.

In the parable of the young man who left his father’s house, went off the rails and was reduced to living with pigs, the Word of God shows us human wretchedness. 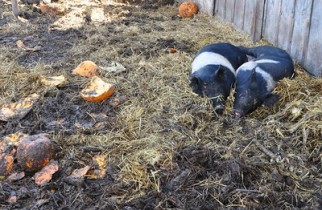 That young man did not find his one-time happiness again until he had realized his moral degradation, had looked into his own heart and had pronounced the words of confession.

These words almost agree with the Lord’s Prayer, because the prodigal son says: ‘Father, I have sinned against heaven and against you.‘ (Luke 15:21)

He would not confess himself to be a sinner against heaven if he were not convinced that the homeland he had left at the time of his going astray were not in actual fact heaven.

By this confession of his he makes himself worthy once again to stand in the presence of his father who runs towards him, embraces him, and kisses him.

The conclusion is this:  To return to heaven there is only one route and that is to admit one’s sinfulness and seek to avoid it.  To make the decision to avoid it is already to be perfecting one’s likeness to God.”  (DRINKING FROM THE HIDDEN FOUNTAIN, pp 345-346)