A ladder stretching from earth to heaven – a ladder of divine ascent – is a popular image and metaphor in Orthodox spiritual writings.  Monks in particular liked the image as describing their own struggles on the way to the Kingdom of Heaven.  One has to exert one’s self to make it up the ladder, and climbing the ladder presents us with many risks for falling off the ladder back down to the depth.  St John Climacus wrote an entire book describing the spiritual life as ascending the ladder, and we remember that book each Great Lent as we consider our own spiritual sojourn as ascending this ladder to heaven. 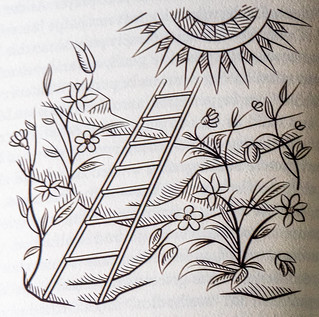 The idea of such a ladder was popular even among pagan religions at the time of Jesus.  The ladder was seen as a fair model of how the spiritual life worked.  Even Jesus dealt with this ladder in the incarnation in which He participated in the same reality we all find on earth.

Roman Catholic theologian Hans Urs von Balthasar describes the paradigm of the ladder as a way to connect heaven and earth needed because for many there was no connection or path between them.  He says the ladder imagery is an …

“… attempt to bridge the gap between God and world by means of ’emenations,’ ‘spheres,’ stages and rungs on which the soul in need o salvation tries to climb up to heaven.  –  Belonging consequently to this group is also the idea that the Logos incarnated himself on all these stages and rungs so that he, just as he was human to humans, was also angel to angels; and consequently, the soul which climbs on these rungs to the Father becomes a living ladder to heaven, a cosmic ‘true way.’ (SPIRIT AND FIRE, p 7) 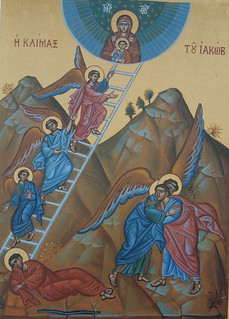 As Balthasar describes the idea, each person who successfully makes the sojourn to the top of the ladder becomes himself or herself a living ladder to heaven which others can imitate or even take.  This brings the spiritual life into the realm of being our personal effort – asceticism.

Jesus describes Himself as:  “I am the way, and the truth, and the life; no one comes to the Father, but by me”  (John 14:6).   Jesus is our way to the Kingdom; He alone is our ladder to heaven.  As Jesus said:  “Truly, truly, I say to you, you will see heaven opened, and the angels of God ascending and descending upon the Son of man” (John 1:51).  Jesus opened Paradise to us all.  We still have to decide to make the climb – to work out our salvation.

We begin this uphill sojourn when we are baptized into Christ – we become one with Christ in baptism.  We are united to Jesus the Ladder.  We don’t have to use all of our energies to climb this ladder.  We only have to humbly submit ourselves to Christ and we become one with Him.  We become the ladder in Christ and reach far into our heavenly homeland. 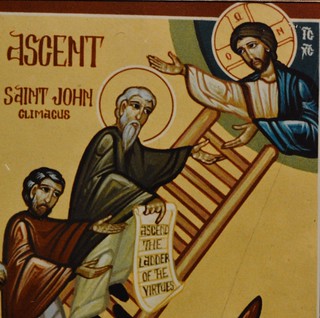 Listen to the words of our Savior:

“Come to me, all who labor and are heavy laden, and I will give you rest. Take my yoke upon you, and learn from me; for I am gentle and lowly in heart, and you will find rest for your souls. For my yoke is easy, and my burden is light.”  (Matthew 11:28-30)

Christ does not set before us Mt. Everest and say, “Good luck in getting to the top – not many will make it.”  He doesn’t place as a roadblock some impossible challenge so that He can enjoy watching us fail.  In Him, we find rest – the way to the Kingdom is found by uniting our self to Him.  He takes on our burdens, carrying them on the cross, so that in Him we can enter the Kingdom.  Each of us does not need to worry that “I don’t have the strength, purity, will, energy” to get up the ladder into the Kingdom of Heaven.  You don’t need it.  Humble yourself and unite yourself to Christ – for He opens the door to Paradise for you.   It turns out that the ladder is not the way to Christ, for Christ is the ladder.  United to Him, we are instantly brought from death to life and from earth to heaven.  Following Christ is not the beginning of our spiritual problems and struggles.  Rather, in Christ we attain “the hopes and fears of all the years.” 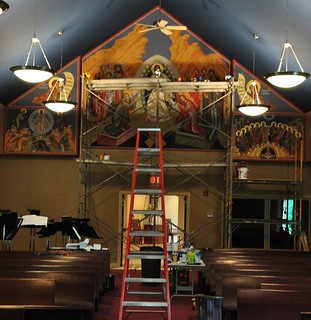 2 thoughts on “Climbing the Ladder of Divine Ascent”