Today, May 1, in the Orthodox Church we honor the memory of the Holy Prophet Jeremiah.  He warned his fellow Jews that they should not trust in being the chosen people nor in God’s Temple in their midst.  God wanted a holy people – the Temple was to be a sign of God’s presence with His holy people, but if the people themselves were not living righteous lives, the Temple not only would not make them holy but would be polluted by their sins.

“Behold, you trust in deceptive words to no avail. Will you steal, murder, commit adultery, swear falsely, burn incense to Baal, and go after other gods that you have not known, and then come and stand before me in this house, which is called by my name, and say, ‘We are delivered!’ —only to go on doing all these abominations? Has this house, which is called by my name, become a den of robbers in your eyes? Behold, I myself have seen it, says the LORD.”  (Jeremiah 7:8-11)

Of course we know Jeremiah’s words were fulfilled in the time of Christ.

And Jesus entered the temple of God and drove out all who sold and bought in the temple, and he overturned the tables of the money-changers and the seats of those who sold pigeons. He said to them, “It is written, ‘My house shall be called a house of prayer’; but you make it a den of robbers.” And the blind and the lame came to him in the temple, and he healed them.   (Matthew 21:12-13)

In the Temple of God Jesus healed the blind and the lame – He did the work of God.  St Luke adds to the story:  And he was teaching daily in the temple. The chief priests and the scribes and the principal men of the people sought to destroy him…  (Luke 19:47)

For us today, rather than thinking this story is merely an attack on ancient Jews, we might consider who and what we are as parishes and parishioners.  Do we assemble to learn the teachings of Jesus?  Do we come to be healed of our sins?   Do we welcome the sick, the poor and outcasts to minister to them?  Or do we want visitors to come to our festivals in order to take their money?  Do we, like those ancient men, want to destroy those we do not understand or agree with? 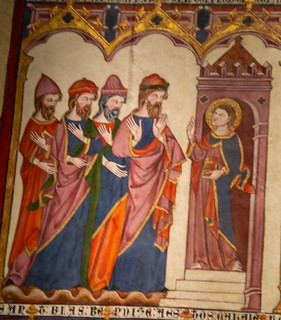 Is our parish, the community as well as the building is to be what Jesus taught:  ‘My house shall be called a house of prayer for all the nations‘? (Mark 11:17)  Do all people – those living in the neighborhoods around the church or any strangers or seekers – think of our buildings and parishes as people they want to pray with or buildings in which they can seek God?