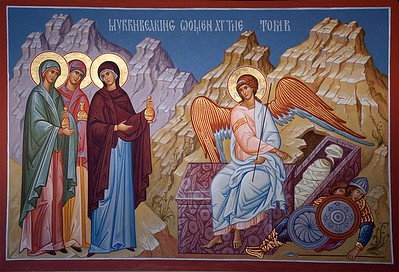 It is a good day for us to think about our call by Christ to serve others.  This call is given to both women and men not just to males or monks.  The life of the parish is ministry and every parish member is expected to actively engage in and support the ministry of the entire community.  Even in the patriarchal ancient world, the early Christians did understand women too were to be full Christians once they were baptized.  So we read in Origen from the 3rd Century:

He is teaching even in this that women likewise ought to labor for the churches of God.  For they labor both when the teach young women to be modest, to love their husbands, to raise children, to be pure and chaste, to govern their homes well, to be kind, to be submissive to their husbands, to receive in hospitality, to wash the feet of the saints, and all the other things written that are recorded concerning the services of women to do with all purity.”   (Origen, COMMENTARY ON THE EPISTLE TO THE ROMANS Books 6-10, p 293) 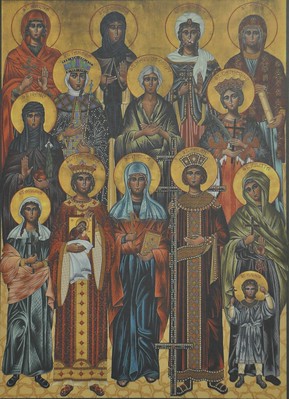 The things Origen mentions as the Christian labor for women are actually the teachings of Christ which apply to all Christians both male and female:  modesty, love for spouse, raising children in the faith, purity and chastity, ruling their homes, kindness, submission to one another, being hospitable, washing the feet of the saints.    Origen simple takes the Gospel commandments which Christ gave to all and applies them particularly to women.  Even these things which seem mundane family life matters are opportunity for us to practice ministry and discipleship.  In our homes both parents have some identical roles as Christians, but they can agree on a division of labor in the home as to who does each job.  No doubt in these early centuries of Christianity they had far more limiting ideas about the clearly defined roles of men and women than we have.  So in our world in which women can have PhDs,  or be CEOS, generals, entrepreneurs, inventors, scientists and politician, we need to expand our thinking about the roles of women in the parish community as well.

Some feel that St Paul in the New Testament circumscribes the role of women.  However Fr Paul Nadim Tarazi gives a rather interesting interpretation to Paul’s teaching about the role of women in the Church.

“Paul’s solution is to remind everyone that the ‘change’ brought about by the granting of God’s spirit through baptism does not entail equality between man and woman (before God), i.e., ‘raising’ woman to the level of man; rather it means that man is dislodged from his place of preeminence (as God’s representative), for that position is now taken by the crucified Christ who is Lord over man.  In other words, the change entails the ‘demoting’ of man to being subdued to someone who died shamefully on the cross.  That this is Paul’s point can clearly be seen in the way the ‘hierarchy’ in v. 3 [1 Cor 11:3] does not follow either an ascending (woman-man-Christ-God) or descending (God-Christ-man-woman) scheme: ‘But I want you to understand that the head of every man is Christ, the head of a woman is her husband, and the head of Christ is God.‘  Thus, what Paul wants the Corinthians to know is that ‘the head of every man is Christ,’ Not God himself.  And since Christ, not man, is the lord, then whatever he wills IS binding.  And if he wills that a woman speak the ‘word of the Lord,’ i.e., his word, then so shall it be.  But, by the same token, this does not mean that woman per se has been ‘allowed’ to speak in the church gatherings, not at all.  It is always Christ, and only he, who speaks his ‘prophetic’ word through a prophet, not through man or woman. ”  (PAUL AND MARK, pp 66-67)

In other words, a person doesn’t become a prophet or priest because he is male.  One is chosen by God to be God’s spokesperson.  Christ is the head of His Church and as Lord He wills who has roles of authority in the community.  Christ doesn’t chose his prophets and priests based on gender.  He wills who He wants and needs to serve His Church.  The Myrrhbearing Women are the first evangelists and apostles chosen be Christ.  The Lord sends these Women to his male disciples to proclaim the Good News.  Christ decides who will proclaim his message to the assembled faithful. 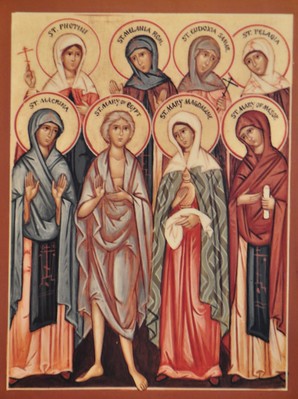 The issue isn’t that males have a right to lead in the Church but females don’t.  Nor is the issue that women have some right which they can claim because they are females.  The Church does not have gender equality governing its life – there is neither male nor female St Paul says in Galatians 3:28.  The issue is that the Lord decides who can speak on His behalf and He chooses the people He wants and needs whether they are male or female and without regard for always guaranteeing equality between the genders.  So women are not excluded because they are females and men are not chosen merely by being male.  Christ chooses based on His own wisdom.  “You did not choose me, but I chose you and appointed you that you should go and bear fruit and that your fruit should abide; so that whatever you ask the Father in my name, he may give it to you” (John 15:16). 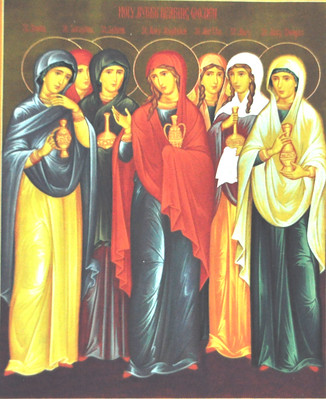 Christ chose the Myrrhbearing Women to be His first apostles and evangelists.  He chooses women today to speak for Him – to teach in His Name, to evangelize, to be saints, and to be martyred too.   The far more difficult task for us is to recognize whom He chooses to reveal His word.

In Hebrews 2:14-18 it is clear that the Word of God became human “so that he might become a merciful and faithful high priest in the service of God...” (vs. 17).  The only way for Christ to be our High Priest was for Him to become human, not male, but human.  Christ needs all that is human, including females in order to be not just a High Priest but one who is merciful and faithful.  We need women disciples of the Lord and women saints to show us the fullness of the incarnate God and for us to understand our own humanity.