Then Saul, still breathing threats and murder against the disciples of the Lord, went to the high priest and asked letters from him to the synagogues of Damascus, so that if he found any who were of the Way, whether men or women, he might bring them bound to Jerusalem.  As he journeyed he came near Damascus, and suddenly a light shone around him from heaven. 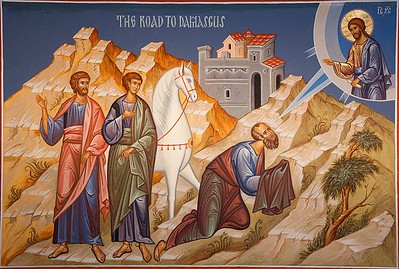 Then he fell to the ground, and heard a voice saying to him, “Saul, Saul, why are you persecuting Me?”  And he said, “Who are You, Lord?” Then the Lord said, “I am Jesus, whom you are persecuting. It is hard for you to kick against the goads.”  So he, trembling and astonished, said, “Lord, what do You want me to do?” Then the Lord said to him, “Arise and go into the city, and you will be told what you must do.”  (Acts 8:1-6)

Paul’s understanding of the future is essentially Jewish, with one additional feature – his conviction that Christ had already been raised from the dead.  Since resurrection was part of the Jewish expectation about what would happen in what was termed ‘the age to come’, in contrast to ‘the present age’, this meant that the age to come had in a sense already begun.  The future has broken into the present.  (p 46) 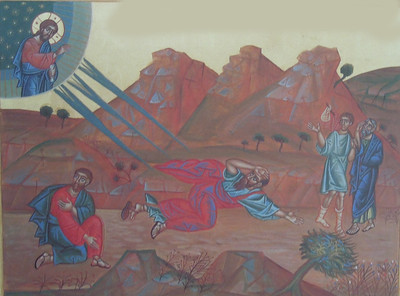 If it was Paul’s experience of the resurrection – his encounter with the Risen Christ – that transformed his understanding of God’s purposes, this was because it was this experience that convinced him that the crucified Jesus was indeed ‘Christ’, the Messiah.  That recognition brought with it the acknowledgement that the crucifixion itself had been part of God’s saving purpose – an idea which he had previously regarded as blasphemous.  (pp 46, 47)