trampling down death by death and

upon those in the tombs bestowing life! 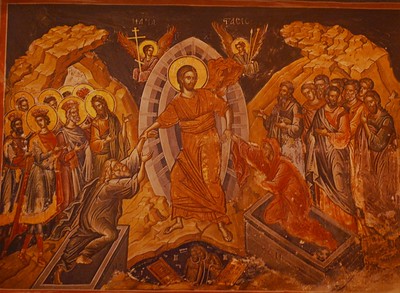 Christianity is a materialist religion.  We celebrate as fact that everything in the world, including our bodies, were made by God and so are by nature good.  We rejoice in the bodily resurrection of our Lord and Savior Jesus Christ.  And we believe salvation is theosis – we each are to be united to God which fulfills the expressed theology of the early church that God became human so that we humans can become god.   Our bodies are not the enemy, our bodies are not evil, rather the holy body has become corrupted by sin and death.

“‘Who will deliver me from this body of death?‘ Paul asks in Romans (7:24).  But for Paul, the sense of the flesh as a negative thing comes not from the fact that flesh is physical rather than spiritual, but from the fact that, as a result of sin, it is death-bearing.  For Paul, the world, before God’s will is completed in it, is given over to suffering and death, to the mystery represented by Christ’s Passion and Cross. The problem is not with the physical, fleshly nature of our being.  The problem, rather, is that the physical world and the flesh – both holy and good from the time of creation – have been dragged into sin and death by a spiritual not physical, failing that we both choose and fall into, a dark possibility that infected the world from the moment we received the possibility of choice.”  (John Garvey, DEATH AND THE REST OF OUR LIFE, p 71) 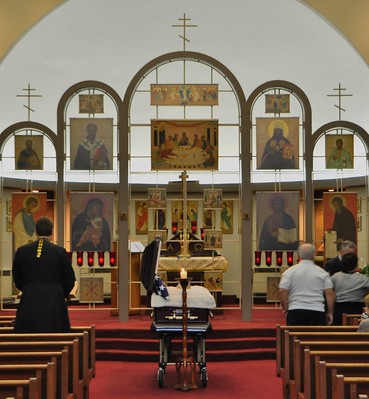 While the thought of death is often loathsome and fearful to us, the “… remembrance of death is a virtue commended to Christians at their baptism and in all the sacraments.  God calls every Christian to live toward dying by way of this mimesis and remembrance.  Practicing this virtuous habit throughout life will prepare us for dying in a manner that preserves hope.” (Vigen Guroian, LIFE’S LIVING TOWARD DYING, pp 60)

“Fear is understandable, because given what we have seen of life, our own life and the lives of others, we know that we can be hurt and can lose everything.  But it is less apparent that continuing attempts to shore up our security, our egos, our safety, are finally doomed to fail.  We will, in fact, ultimately lose it all.  A serious spirituality has to take this into account, with the faith that what we receive will be much greater than what we are tempted to retain – but we must also understand that we cannot and should not try to imagine what we will receive (this is a way of trying to have something we can’t have).  We can only live in the hope and expectation that the promises we have been given are true.”  (John Garvey, DEATH AND THE REST OF OUR LIFE, p 56) 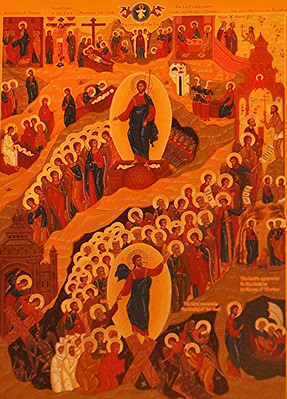 Christian spirituality is life-giving.  However, we neither deny the reality of death or the pain we feel in losing loved ones.  We affirm our faith and hope in the resurrection of Christ as a sign of our own entering into His rest.  We believe Him to be Lord of the living and the dead.  “For to this end Christ died and lived again, that he might be Lord both of the dead and of the living.” (Romans 14:9)