As he passed by, he saw a man blind from his birth. And his disciples asked him, “Rabbi, who sinned, this man or his parents, that he was born blind?” Jesus answered, “It was not that this man sinned, or his parents, but that the works of God might be made manifest in him. We must work the works of him who sent me, while it is day; night comes, when no one can work. As long as I am in the world, I am the light of the world.” As he said this, he spat on the ground and made clay of the spittle and anointed the man’s eyes with the clay, saying to him, “Go, wash in the pool of Siloam” (which means Sent). So he went and washed and came back seeing.  (John 9:1-7) 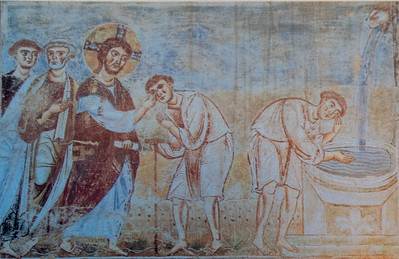 Whereas many people are attracted to the miracles of Christ because they themselves hope for some miracle in their own life, the Evangelist John treats all the miracles to be signs of the Kingdom of God breaking into this world.  In and of themselves the miracles are not all that significant – except to the few who experienced them.  It is what the miracles represent – what they mean – that tells us their true power and what they reveal to us.

Dr Daniel Hinshaw writes about how the miracles reveal the relationship between the material and spiritual worlds.  The spiritual and material are two parts of the same created reality that we all live in.  In Christ all things come together – heaven and earth, material and spiritual, divinity and humanity, Creator and creation, angels and humans, the living and the dead, humanity and the entire cosmos including all other living organisms. 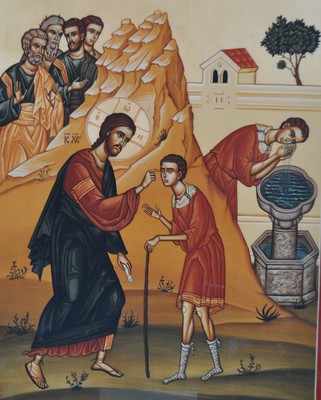 “The healing of the man born blind highlights an essential and very practical implication of the incarnation.  God is pure spirit.  But when God the Word united himself with his material creation, the spiritual acquired materiality, and conversely, the material was infused with the spiritual.  This truth is at the heart of the lived experience of the mysteries of the Church.  … Physical elements are central to all of the mysteries.  They make it possible for each believer to be literally touched  by the divine, the spiritual reality hidden within the physical elements of the mystery.   Thus, for example, each believer is illuminated through washing with the waters of baptism, just as the man born blind was illuminated after washing with the waters of Siloam.  The early Christians were not only enjoined to pray for the sick, but also the presbyters of the Church were called to anoint the sick person with oil in the name of the lord (Jas 5:14).”   (TOUCH AND THE HEALING OF THE WORLD, p 41)

Christ is able to save, to restore, to redeem, to heal, to create all things new because He is God incarnate.  Christ created all things in the beginning with the Father and the Holy Spirit.  As a human, He unites divinity to humanity again, as was intended by God before humans chose to separate themselves from God through their own sinful choices. The miracle, in this case of the man born blind, is the revelation of who Jesus is.  He can heal because of who He is.  He heals the man born blind by creating his eyes so that he can see – Jesus brings to completion that part of creation which was stunted by the fallen world. 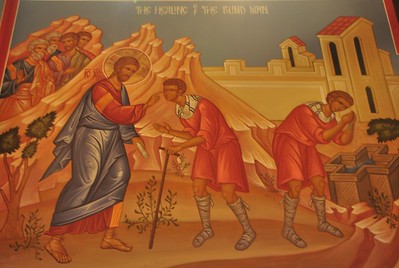 He renewed the earth that had grown old because of Adam.  A new creation came to be by His spittle, and the All-sufficient set straight bodies and minds.  Come, you blind, and without money receive sight. . . .  The Son of the Creator is He Whose treasures are full of all benefits.  Let the one who needs eyes come to Him.  He will make clay and transform it.  He will make flesh.  He will enlighten eyes.  With a little clay He showed that by His hand our dust was formed.  The soul of the dead man also witnessed that the human soul was breathed in by Him.   [Footnote: Ephrem interprets John 9:6 in relation to Genesis 2:7; the healing shows that Christ is the same One Who created the first human being. (HYMNS, p 156)