St James, the Apostolic head of the Church in Jerusalem in the time immediately after Christ’s resurrection, gives a speech at the first recorded council of the Apostles and early church elders (Acts 15) in which in accepting the Gentiles into the Church he notes this is in accordance with what the prophets wrote:

‘After this I will return and will rebuild the tabernacle of David, which has fallen down; I will rebuild its ruins, and I will set it up; so that the rest of mankind may seek the LORD, even all the Gentiles who are called by My name, says the LORD who does all these things.’  Known to God from eternity are all His works. (Acts 15:16-18)

St James uses the quote to justify accepting Gentiles into the communion of the faithful.  James connects the rebuilding of the tabernacle with the acceptance of the Gentiles into the Faith.  The tabernacle has taken on a spiritual meaning for St James – he is not just envisioning the physical building in Jerusalem.  The walls of the temple were meant to keep Gentiles out – and their having broken down would usually be a bad sign that the Gentiles had successfully invaded the temple (see for example Jeremiah 52:12-14).   The walls stood as a sign of the separation between Jew and Gentile.

What James understands the prophets to say is that when God rebuilds the temple walls, they will no longer serve the same old purpose.  Now God will rebuild the collapsed walls to enclose and incorporate the Gentiles into the family of faith.  The temple is rebuilt precisely to allow the Gentiles – and all mankind as we sing in the Liturgy – to seek the Lord.  St. James understands this to be the message of the prophets, now fulfilled in Jesus Christ.  The death of Christ is being related to the destruction of the temple, and His resurrection to the rebuilding of the temple.  James bases this in part on his understanding of  Amos 9:11-12 :

“On that day I will raise up [Greek: anasteso, resurrect] the tabernacle [tent, Greek: ten skenen] of David that is fallen and raise up its destruction, and rebuild its ruins, and rebuild it as in the days of old; in order that those remaining of humans and all the nations upon whom my name has been called might seek out me, says the Lord who does these things. 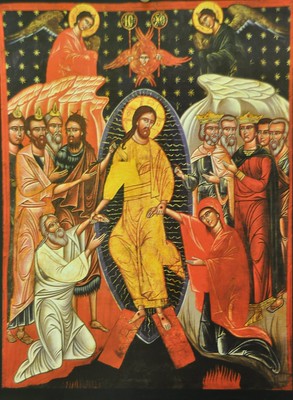 The Amos text in the Septuagint makes a clear connection between the rebuilding of the tabernacle and the resurrection  by the Greek word it uses to “raise up” (anasteso).  The prophecy connects the joining of all humans to the Lord (not just Jews but Gentiles as well).  I found his quote and comment interesting because it reminded me of the Gospel lesson in which the Lord Jesus identifies his own body with the temple.

The Jews then said to him, “What sign have you to show us for doing this?” Jesus answered them, “Destroy this temple, and in three days I will raise it up.” The Jews then said, “It has taken forty-six years to build this temple, and will you raise it up in three days?” But he spoke of the temple of his body. When therefore he was raised from the dead, his disciples remembered that he had said this; and they believed the scripture and the word which Jesus had spoken.  (John 2:18-22)

Apparently St James remembers Christ’s words when he quotes Amos in defending the entry of the Gentiles into the people of God.