Not parted from the Father’s bosom, O sweetest Jesus, and having lived among those on earth as man, today You have been taken up in glory from the Mount of Olives, and in Your compassion exalting our fallen nature, You have seated it with the Father. Therefore the heavenly ranks of the Bodiless Powers were amazed at the wonder, and beside themselves with fear; and seized with trembling, they magnified Your love for mankind. (From the Vespers of Ascension) 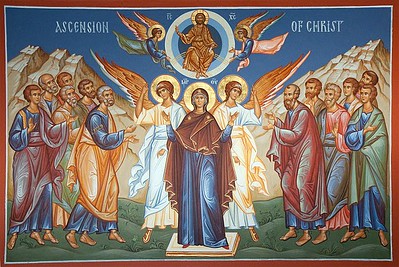 One aspect of the mystery of salvation is that Jesus is fully God and fully human.  As the hymns of Ascension point out, even when Christ walked on earth, He was never separated from the Father.  In other words, He remained fully divine even though incarnate as a human.  Christ overcame that separation which sin had caused – it was sin that built the great wall of separation between humans and God.  But Christ walked on earth fully united to God the Father, fully One of the Holy Trinity.  God walked on earth with us sharing in time and occupying space.  The Elder Aimilianos muses:

Even though we were separated from God – covering ourselves with fig leaves, not realizing that these would become a wall separating us from God – He did not cease to love us, and broke down those walls and gave us the possibility to draw near to Him, to embrace Him, and be united to Him. Let us rejoice in this freedom that He has given us, and for the greatness of which He has deemed us worthy, that is of His love. (Archiimandrite Aimilianos, THE MYSTICAL MARRIAGE, p 24)

The Feast of the Ascension is not a Feast to celebrate a biographical event in the life of Christ, but one which celebrates the salvation of the human race.  Biographically, Jesus departed from us into heaven, apparently leaving us behind and alone.  Theologically, Christ remains united to our humanity and thus to us.  His life enthroned in the Kingdom, means humanity has been restored to union with God – sharing the divine life.  The Feast of the Ascension is a theological reminder that our beginnings and our destiny are both in God.  Our life on earth opens to us the potential of experiencing that life now, not just in some distant heaven at the end of the universe. 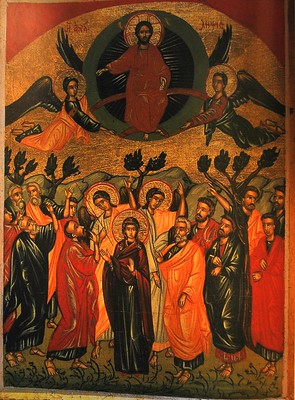 The nature of Adam, which had descended to the nethermost parts of the earth, You renewed in Yourself, O God, and today, You took it up above every Principality and Power, for as You loved it, so You seated it with Yourself; and having compassion on it, You united it with Yourself; and united with it, You suffered with it; and You Who are passionless have glorified it with Yourself. But the Bodiless Powers were asking: “Who is this Man of beauty? Not man only, but both God and man, the two natures together made manifest.  (From the Vespers of Ascension)