Now on the first day of the week, when the disciples came together to break bread, Paul, ready to depart the next day, spoke to them and continued his message until midnight.  .  .  .   Now when he had come up, had broken bread and eaten, and talked a long while, even till daybreak, he departed.  (Acts 20:7-11)

“Justin Martyr in his First Apology written about the year 150 C.E., gives a detailed description of a Sunday worship service centered on Eucharist:

‘And on the day called Sunday (te tou Eliou legomene emera), all who live in cities or in the country gather together to one place, and the memoirs of the apostles or the writings of the prophets are read, as long as time permits; then, when the reader has ceased, the president verbally instructs, and exhorts to the imitation of these good things.  Then we all rise together and pray, and, as we before said, when our prayer is ended, bread and wine and water are brought, and the president in like manner offers prayers and thanksgivings, according to his ability (hose dynamis auto), and the people assent, saying Amen; and there is a distribution to each, and a participation of that over which thanks have been given [or: ‘of the eucharistic elements’], and to those who are absent a portion is sent by the deacons.

And they who are well to do, and willing, give what each thinks fit; and what is collected is deposited with the president, who succors the orphans and widows and those who, through sickness or any other cause, are in want, and those who are in bonds and the strangers sojourning among us, and in a word takes care of all who are in need.  But Sunday is the day on which we all hold our common assembly, because it is the first day on which God, having wrought a change in the darkness and matter, made the world; and Jesus Christ our Savior on the same day rose from the dead. 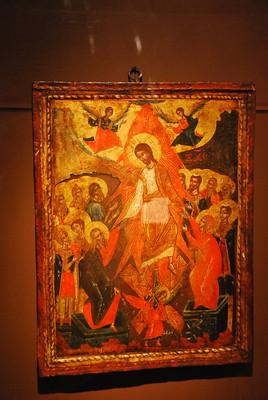 For he was crucified on the day before that of Saturn [Saturday]; and on the day after that of Saturn, which is the day of the Sun, having appeared to his apostles and disciples, he taught them these things, which we have submitted to you also for your consideration.”  (Eugen Pentiuc, THE OLD TESTAMENT IN EASTERN ORTHODOX TRADITION, pp 204-205)