The Holy Apostle Peter preached this sermon soon after the Lord’s resurrection:

“You that are Israelites, listen to what I have to say: Jesus of Nazareth, a man attested to you by God with deeds of power, wonders, and signs that God did through him among you, as you yourselves know— this man, handed over to you according to the definite plan and foreknowledge of God, you crucified and killed by the hands of those outside the law. But God raised him up, having freed him from death, because it was impossible for him to be held in its power. For David says concerning him,

‘I saw the Lord always before me,

for he is at my right hand so that I will not be shaken;

therefore my heart was glad, and my tongue rejoiced;

moreover my flesh will live in hope.

For you will not abandon my soul to Hades,

or let your Holy One experience corruption.

You have made known to me the ways of life;

you will make me full of gladness with your presence.’

“Fellow Israelites, I may say to you confidently of our ancestor David that he both died and was buried, and his tomb is with us to this day. Since he was a prophet, he knew that God had sworn with an oath to him that he would put one of his descendants on his throne. Foreseeing this, David spoke of the resurrection of the Messiah, saying,

‘He was not abandoned to Hades,

nor did his flesh experience corruption.’

This Jesus God raised up, and of that all of us are witnesses. Being therefore exalted at the right hand of God, and having received from the Father the promise of the Holy Spirit, he has poured out this that you both see and hear. For David did not ascend into the heavens, but he himself says,

‘The Lord said to my Lord,

“Sit at my right hand,

until I make your enemies your footstool.”’

Therefore let the entire house of Israel know with certainty that God has made him both Lord and Messiah, this Jesus whom you crucified.”  (Acts 2:22-36) 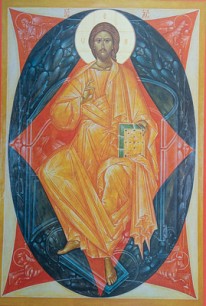 In the Fifth Century, a monk now known as Pseudo-Macarius wrote about an idea common in the early Church – namely, about Christ’s descent into Hades after His death.  This came to be a common theme associated with Holy Saturday.  There were several who composed an imagined dialogue in Hades between Christ and Death or between  Christ and Satan.  Some also wrote about an imaginary dialogue between the panicked Satan and Death.  In Pseudo-Macarius version, Death defends his claim on all the dead humans for humans have been obeying him rather than God.  Satan says his claims are valid and just since God even signed documents assigning all humans who sinned to him upon their death. Christ challenges the justice of Satan – for Death was also unjustly claiming a sinless one.

“For what does the Apostle say? ‘But we preach Jesus Christ crucified; to the Jews a stumbling block and to the Greeks foolishness, but, to us who are saved, Christ is the power of God and the wisdom of God’ (1 Cor 1:24).  In the dead body there is life.  Here is redemption, here is light.  Here the Lord comes to death and argues with death.  He orders that death release, from hell and death, the souls and give them back to him. 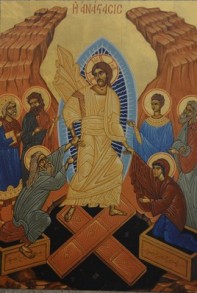 Behold death is shaken by these words and approaches his servants and gathers together into a group all his powers and princes of evil.  And the prince of evil bears forth the signed documents of indentured slaves and declares: ‘Look, these people have obeyed my word! See how they, mortal men, have bowed down in adoration to us!’  But God, who is a just judge, shows then his justice and says to him: ‘Adam obeyed you and you did then through him capture all hearts.  Humanity obeyed you.  But my body, what is it doing here?  It is sinless.  That body of the first Adam was in bondage to you and you legally held the writ of indenture.  But all bear witness to me that I have not sinned.  I owe you nothing.  And that I am the Son of God all universally bear witness. “For from above out of the heavens there came upon earth a voice bearing testimony: ‘This is my beloved Son; hear him’ (Mt 3:17).  John gives witness: ‘Behold, the Lamb of God, that takes away the sin of the world’ (Jn 1:29).  And again Scriptures says: ‘He who sinned not, nor was there any guile found in him’ (1 Pt 2:22).  And again: ‘The prince of this world comes and in me finds nothing’ (Jn 14:30).  And moreover, you yourself, Satan, witness to me in saying: ‘I know you, that you are the Son of God’ (Mk 1:24).  And again: ‘What do we have to do with you, Jesus of Nazareth? Have you come here to torment us before the time?’ (Mt 8:29).  There are, therefore, three who bear witness to me: he that sends down from the heavens a voice; and those who are on earth; and you yourself.  I, therefore, bought back the body that was sold to you by the first Adam.  I tore up the contract that enslaved mankind to you.  Indeed, I satisfied Adam’s debts when I was crucified and I descended into hell.  And I command you, O Hell, O Darkness, O Death, release the imprisoned souls of the children of Adam.’ And so at last, the wicked powers, struck with fear, restore the imprisoned children of Adam.

Really, when you hear that at that time the Lord freed the souls from hell and the regions of darkness and that he descended into hell and did an amazing work, do not think that this does not have any personal meaning for you.  Man, indeed, can readily accept the evil one.  Death has its grip on the children of Adam and their thoughts are imprisoned in darkness.  And when you hear mention made of tombs, do not at once think only of visible ones.  For your heart is a tomb and a sepulcher.  When the prince of evil and his angels have built their nest there and have built roads and highways on which the powers of Satan walk about inside your mind and in your thoughts, then, really are you not a hell and a sepulcher and a tomb dead to God?   (THE FIFTY SPIRITUAL HOMILIES, pp 94-95) 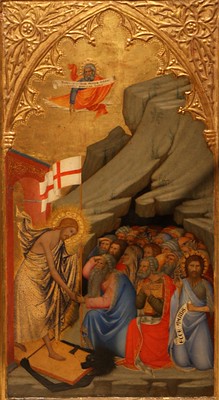 Pseudo-Macarius moves the event of Christ’s descent into Hades from a one time event in the distant past, to something we each experience.  For he points out that our hearts are dark like hell (think Mark 7:20-23), and the heart is like a tomb holding a dead soul.  For when we allow Satan and evil thoughts into our hearts, we turn them into a hell and a tomb.  The descent of Christ into hell is also His descent into our hearts to transfigure us and save us.  Holy Saturday thus becomes a personal experience for each of us for we invite Christ into our hearts to defeat sin, Satan, death and darkness and make our hearts into heaven – the dwelling place of God.