And as they were speaking to the people, the priests and the captain of the temple and the Sadducees came upon them, annoyed because they were teaching the people and proclaiming in Jesus the resurrection from the dead. And they arrested them and put them in custody until the morrow, for it was already evening. But many of those who heard the word believed; and the number of the men came to about five thousand. 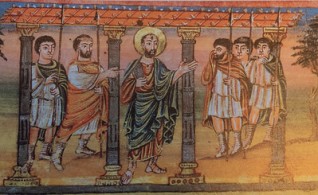 On the morrow their rulers and elders and scribes were gathered together in Jerusalem, with Annas the high priest and Caiaphas and John and Alexander, and all who were of the high-priestly family. And when they had set them in the midst, they inquired, “By what power or by what name did you do this?” Then Peter, filled with the Holy Spirit, said to them, “Rulers of the people and elders, if we are being examined today concerning a good deed done to a cripple, by what means this man has been healed, be it known to you all, and to all the people of Israel, that by the name of Jesus Christ of Nazareth, whom you crucified, whom God raised from the dead, by him this man is standing before you well.  (Acts 4:1-10) 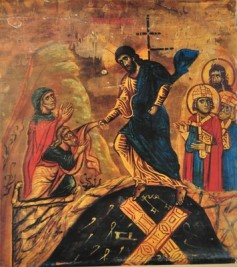 The Apostle Peter makes clear to the Jewish religious leadership that Jesus Christ, whom they put to death through crucifixion has been raised from the dead by God the Father.  It is only through the Name and Power of Jesus that the crippled man was healed but certainly not through any power that Peter personally possesses.  The religious leaders may have thought Jesus was misleading the people, but God has shown them otherwise – by raising Christ from the dead, God is giving the religious leaders a second chance to embrace Jesus as Lord and Christ.  For Peter, God raising Jesus from the dead has changed everything for everyone and he is inviting the religious leaders to re-evaluate their relationship to Jesus Christ.  And the resurrection is not merely a past historical event, for Christ shows He is alive by healing the crippled man even though Christ was not physically present to heal the man. 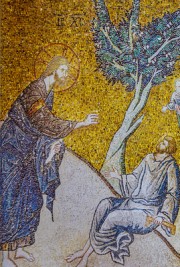 Theodoret of Cyrus, writing in the 5th Century, comments on the words of St Paul about the resurrection of Christ from the dead and its implication for humanity:

“If, then, you have been raised with Christ, seek the things that are above, where Christ is seated at the right hand of God.  Have a mind for things above, not for things on earth (Colossians 3:1-2): you shared resurrection with Christ.  He is seated over all in the heavens with the Father; so imitate the life above.  After all, you have died, and your life is hidden with Christ in God.  When Christ, your life, is revealed, then you also will be revealed in glory with him (3:3-4): you became dead to the present life, being buried in baptism with Christ and receiving the hope of resurrection – the meaning of your life is hidden with Christ in God.  After all, with his rising all were raised.  But we do not see the outcome in reality: the mystery of our resurrection is hidden in him.  When he comes a second time, therefore, then we shall attain resurrection and enjoy immortal life.  Now, it was very apposite for him to say also in reference to Christ, he is revealed: he is not seen even by us and is completely unknown by the unbelievers.  He said it also in reference to us, you will be revealed in glory: in hope we have the promises of the good things; what is now unknown will then be revealed.  (COMMENTARY ON THE LETTERS OF ST PAUL  Vol 2, pp 96-97) 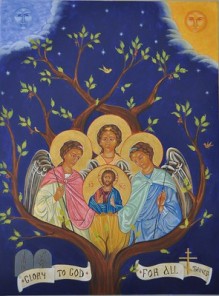 Though we have died with Christ in baptism, and were raised from death with Christ, part of the effects of the resurrection remain hidden from our eyes.  Christ is in heaven and though we still walk on earth, through baptism we are united to Christ so that part of our lives, part of us, is now in Christ in heaven.  This part of our life is still hidden from us in our life on earth, but it is as real as anything we experience in this world.  The glory of the Lord, which God shares with us, still is a hidden mystery for us, but we are ever moving toward that event in which all will be revealed in Christ.