Then Philip went down to the city of Samaria and preached Christ to them. And the multitudes with one accord heeded the things spoken by Philip, hearing and seeing the miracles which he did. For unclean spirits, crying with a loud voice, came out of many who were possessed; and many who were paralyzed and lame were healed. And there was great joy in that city.  . . .  Now when the apostles who were at Jerusalem heard that Samaria had received the word of God, they sent Peter and John to them, who, when they had come down, prayed for them that they might receive the Holy Spirit. For as yet He had fallen upon none of them. They had only been baptized in the name of the Lord Jesus. Then they laid hands on them, and they received the Holy Spirit.   (Acts 8:5-17)

Philip bringing Christ and the Gospel to the Samaritans was one of the first signs that Christianity was moving in a different direction than Judaism, and in fact was parting company with the Jews.  We all know the words from John’s Gospel: “The Samaritan woman said to Jesus, ‘How is it that you, a Jew, ask a drink of me, a woman of Samaria?’ For Jews have no dealings with Samaritans” (John 4:9; emphases added).  Jews opposed the Samaritans as heretics and enemies or worse.  Christians however were taking the Gospel to the world and saw all people of the world as the beneficiaries of Christ’s salvation and potential converts to the Gospel.  As biblical scholar James Dunn notes:

“… following the breakthrough with the Samaritans, to whom Philip ministered.  A clear implication is that the gospel was being extended beyond the limits allowed for in the Temple cult, and that in this way the breach with the Temple and its traditions was being widened still further.”  (PARTINGS OF THE WAYS, p 96)

The Jews did not allow Samaritans into the Temple, let alone to worship there.  Yet the Lord God had said to Israel through His prophet Isaiah, “for my house shall be called a house of prayer for all peoples” (Isaiah 56:7).  It was the Christians who moved to fulfill Isaiah’s words by reaching out to all peoples and including them in the Body of Christ. Thus Christ superseded the Temple accomplishing what God envisioned for His chosen people but which Judaism had failed to do.

Christianity accepted (albeit slowly at first) that the Gospel was meant for all the peoples of the world, not just the Jews.  This necessitated the Christians to adapt the Gospel message to non-Jewish people. They weren’t proclaiming a different Gospel, nor an anti-Semitic one, but were presenting God’s Word to the Gentile world, addressing new issues which they didn’t have to deal with when only dealing with their fellow Jews. It is an important element in evangelism which Orthodoxy today needs to remember.  As we bring the Gospel to new peoples of the world (the New World, the third world, 21st Century people, the scientifically minded, etc), we have to consider how WE must adapt the Gospel to what people today need to hear from God.  Simply repeating past formulas, no matter how essential those formula were to Orthodox in the past, is not enough to bring the Gospel to the world today.  We have to be ‘bilingual’ speaking both the language of the Gospel and theology as well as of the people of the West and the 21st Century.

Roman Catholic biblical scholar Jean Danielou offers a few thoughts about how the first Christians realized the message to Gentiles and pagans would be different from the way the Gospel was presented to the Jews.  He writes:

“When addressed to the Jews, the sole object of the kerygma was to awaken faith in Christ; addressed to pagans it had the additional task of moving them to renounce idolatry—a point clearly expressed by Clement of Alexandria (Strom. VI:44,4).”

“Speaking to pagans, they concentrate their attention on the stepping-stones to Christianity which already existed in paganism.  They strive to show that Christianity is in conformity with all that is worthiest in the human soul, and that by contrast paganism runs counter to its aspirations. . . .  the aim of the Apologists is above all to demonstrate the consonance of the Christian message with human reason.”

“Christianity, as a doctrine of the Word, is of a piece with every element in pagan life which has been in accordance with the logos.  What is manifested in Christ is the full splendor of a light which was already illuminating, albeit dimly, the world of paganism… The story is one of a conflict between the disciples of the Word and the disciples of Satan at every level.” (GOSPEL MESSAGE AND HELLENISTIC CULTURE, p 7, 31, 33)

We have to know and understand the people of the 21st Century and ‘the West’ well enough that we can highlight those aspects of the Gospel they most need to hear in order to come to faith.  This is not preaching a different Gospel to different people, but learning how to remain faithful to the Good News of Salvation by focusing on those aspects of the Gospel which are most needed by modern people.  St Paul is clear: “I am astonished that you are so quickly deserting him who called you in the grace of Christ and turning to a different gospel— not that there is another gospel, but there are some who trouble you and want to pervert the gospel of Christ. But even if we, or an angel from heaven, should preach to you a gospel contrary to that which we preached to you, let him be accursed” (Galatians 1:6-8).  It is not a different Gospel that is needed, but rather the wisdom to know how to convey the Gospel to people whose questions and beliefs are quite different from the Jews of the 1st Century. The method of evangelism for St Paul is: 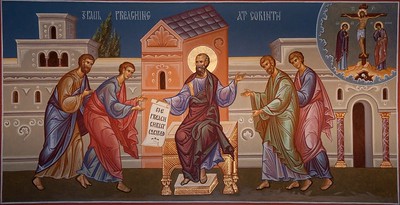