St Paul’s comments above are a great example of how Christianity relied on a ‘spiritual’ interpretation of the Old Testament rather than a merely literal one.  Circumcision certainly has a literal meaning, and its literal sense is one of the things that distinguished Jews from Gentiles. Paul, however, argues that it is the spiritual meaning of circumcision to which God’s people should pay attention (which no doubt came as a surprise to many Jews for whom circumcision is the most fleshly of acts).  He is not the first or the only one ‘spiritualizing’ a biblical text as Judaism in the first century had embraced such interpretations of their Scripture just as pagans were doing to their written texts. It was a common and accepted way to read sacred writings in this time period.  Paul in accepting a spiritual interpretation of the commandment regarding circumcision sets a pattern which Christians will follow in history for making the ‘Jewish’ Scriptures their own.

Paul accepts that the Law (the Old Testament) requires circumcision of all Jewish males, but his argument is that the Law is spiritual, coming from God, so its purpose is mostly spiritual.  The commandment of ‘circumcision’ is therefore not just about the flesh, but is spiritual and it is only its spiritual meaning with which God is concerned.  One could be physically circumcised and yet not be faithful to God, thus not a real Jew. The outward or fleshly sign does not determine the inward or spiritual nature of a person. Circumcision for Paul is an external sign of what is supposed to be an inward (spiritual) state.  God is concerned about the heart, whether or not one is physically circumcised.  Circumcision as it turns out is about faith, the heart, one’s relationship to God, more than about a fleshly act. Circumcision is of the heart, not of the flesh in Paul’s understanding.  Thus, he will accuse Jews who keep physical circumcision of being fleshly but not spiritual (inward)

which was the opposite understanding that Jews had about the practice.  Circumcision was supposed to be a sign that one’s heart had changed and one was faithful to God.  St Paul says when the Jews reject Christ, they show they are not spiritual but rather are fleshly or slaves to fleshly practice denying the spiritual dimension of circumcision.  In reducing circumcision to a physical act, the Jews are in effect denying God rather than obeying God!

St Paul takes an action which seemingly is exclusively about the flesh – circumcision – and proclaims it a spiritual activity of the heart, more than that of the flesh. It is the same logic that allows Paul to claim in Galatians 4:21-31 that the Jews really are children of Hagar rather than of Sarah since they are more focused on the flesh (physical circumcision) rather than on the spirit (circumcision is a spiritual reality – of the heart – more than a physical one). St Paul turns Jewish claims on their head, saying they have totally misunderstood the purpose of the Law.  The Jews may claim to be physical descendants of Abraham through Sarah, but Paul says because they are not spiritually minded they really are related to Abraham through Hagar!   The symbolic interpretation of Scripture becomes the bedrock of Christian theology and scriptural interpretation.  Roman Catholic scripture scholar Louis Bouyer comments on how this thinking is adopted by early Christian writers by discussing Clement of Alexandria.

For Clement, the physical world is symbolic in its very essence, and it is this which prepares us to understand the symbolism of the Scriptures, . . .  Here we need to clarify the sense in which he understands this symbolism, for it is in the pure Jewish tradition.  For Clement, the contemplation of the physical world itself is to lead us to discover its spiritual – meaning by this, personal – character. . . the perception that this world, which may seem inanimate, is merely the covering and the translation of spiritual existences. . . And it is in having us discover the angels behind the cosmos by associating us with them that it prepares us, like them, to see Christ behind the whole of sacred history.  To this extent gnosis sees “behind the world the intelligible realities and, beyond these realities themselves, more spiritual ones” . . . This leads us towards a summit of gnosis which seems decidedly mystical, if this word is given the meaning of a divine vision transforming man into the image of what he sees.  The gnostic is called to “know God” . . .(Louis Bouyer, THE SPIRITUALITY OF THE NEW TESTAMENT AND THE FATHERS, pp 270-271) 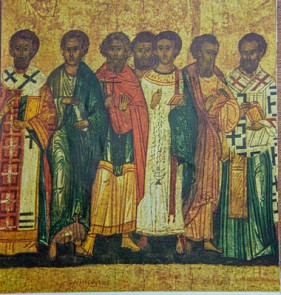 By looking for the spiritual meaning and divine depth of the Scriptures we become transformed into what we are reading and seeing.  The Law is not meant to just help us live in this world but rather is supposed to transfigure us so that we can enter into life in the world to come.  When we obey God we anticipate life in the Kingdom which is to come, and begin to make that Kingdom present in our own hearts, homes and lives.   When we can see what we are to become spiritually, it gives us direction in life and leads us to become what we are told to be by Christ.