Then Saul, still breathing threats and murder against the disciples of the Lord, went to the high priest and asked letters from him to the synagogues of Damascus, so that if he found any who were of the Way, whether men or women, he might bring them bound to Jerusalem. As he journeyed he came near Damascus, and suddenly a light shone around him from heaven. Then he fell to the ground, and heard a voice saying to him, “Saul, Saul, why are you persecuting Me?” And he said, “Who are You, Lord?” Then the Lord said, “I am Jesus, whom you are persecuting. It is hard for you to kick against the goads.” So he, trembling and astonished, said, “Lord, what do You want me to do?” Then the Lord said to him, “Arise and go into the city, and you will be told what you must do.”  And the men who journeyed with him stood speechless, hearing a voice but seeing no one. Then Saul arose from the ground, and when his eyes were opened he saw no one. But they led him by the hand and brought him into Damascus. (Acts 9:1-8) 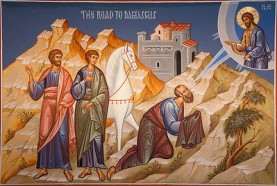 Jacob of Sarug (d. 521AD) poetically comments on the conversion of St Paul:

The Gospel is a light, a light that quenches all others.

When it shone upon Paul, it enlightened him.

At midday, revelation came to the apostle.

Give ear, O prudent one, and lucidly focus your mind.

What kind of light burst forth at midday

to outshine the sun so many times over?

In the darkness of night, a lamp sheds its ray

but the sun by daytime suppresses all other light.

The Light of the Son shone on Saul at noonday.

It eclipsed the sun with a far greater glory.

When the sun arose to the highest rung of heaven,

it blazed from the top of the firmament arch.

Had that light not greatly outshone the sun,

it would not have shown forth in the middle of the day nor have been seen by anyone.

It shone in the day, and because of its rays, day became like unto night;

this was to show that in comparison, our sun is no more than a shadow.

In the sea of its brightness, the persecutor’s eye was flooded and drowned;

he no longer saw any visible things.

His capacity to see retreated into his mind;

his vision turned inside out to reveal hidden beauties within.

until it extinguished the light in his outer eyes.

Because he went out to persecute the light, He (the Light) made him blind

so that he might return a witness to the Light once he was enlightened.

Truly, He is risen!