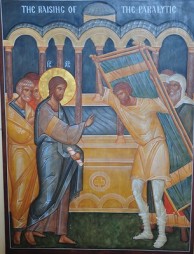 Now a certain man was there who had an infirmity thirty-eight years. When Jesus saw him lying there, and knew that he already had been in that condition a long time, He said to him, “Do you want to be made well?” (John 5:5-6)

Fr John Behr comments on the Gospel lesson in which Christ heals the paralytic at the pool:

The first of these occurs during the healing of the lame man in John 5, where it states that the healing waters were inaccessible to him because he has no ‘human being’ to immerse him in them (5:7).

Christ directs him to ‘rise’ (5:8, ἔγειρε), and in the ensuing exchange about working on the Sabbath, Christ asserts that ‘my Father is working still [ἕως ἄρτι ἐργάζεται] and I am working’ (5:17), leading the Jews to seek to kill him for making himself equal to God (5:18). As Jesus further expounds what this work is, he specifies that what the Father does, and the Son seeing this does likewise, is to ‘raise [ἐγείρει] the dead and give them life’ (5:21), so that one who hears the word of Christ and believes in him who sent him, ‘has eternal life; he does not come into judgment, but has passed from death to life’ (5:24), and this is so because ‘just as the Father has life in himself, so he has granted the Son to have life in himself’ (5:26). (John the Theologian and his Paschal Gospel, Kindle Loc 7092-7101)

Indeed, He is risen!