Come, let us drink a new beverage, not miraculously drawn from a barren rock, but the fountain of Incorruption springing from the tomb of Christ in Whom we are established. (Paschal Canon, Ode 3) 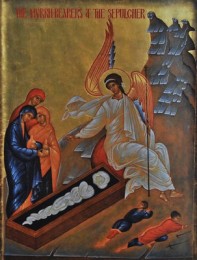 Today in the Orthodox Church is Mid-Pentecost, we are now half between Pascha and Pentecost which in the early years of Christianity was conceived as one 50-day feast. Fifty days of rejoicing in God’s salvation which included no kneeling in repentance and originally no fasting for the entire 7 weeks of the feasting.  Two of the main hymns of Mid-Pentecost explain to us the meaning of this midpoint of the Feasting:

In the middle of the Feast, O Savior, fill my thirsting soul with the waters of godliness, as You cried out to all: “If anyone thirst let him come to me and drink!  O Christ God, fountain of our life, glory to You!” (Troparion) and the

Christ God, the Creator and Master of all cried to all in the midst of the Feast of the Law: “Come and draw the water of immortality!”  We fall before You and faithfully cry:  Grant us Your bounties, for You are the Fountain of our life.  (Kontakion) 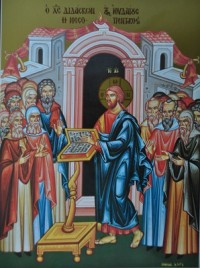 The hymns speak about a spiritual thirst which is slaked by Christ and the Holy Spirit which He sends onto us.  They make reference to a text in the Gospel of St John which we proclaim at the Feast of Pentecost which is the fulfillment of Pascha:

Jesus stood and cried out, saying, “If anyone thirsts, let him come to Me and drink. He who believes in Me, as the Scripture has said, out of his heart will flow rivers of living water.” But this He spoke concerning the Spirit, whom those believing in Him would receive; for the Holy Spirit was not yet given, because Jesus was not yet glorified.”  (John 7:37-39) 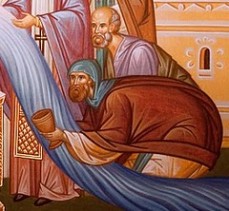 John in his Gospel is proclaiming an idea related to one that St. Paul claims:

There are a number of ideas and images which  are brought together to form an interesting mosaic:

1) the traveling rock which followed Israel and gave them water in the desert –this miraculous rock, so St Paul says, turns out to be Christ. In Jewish tradition the rock is associated with Wisdom;

2) the flowing of spiritual water which comes from Christ is a theme of both Mid-Pentecost and Pentecost; 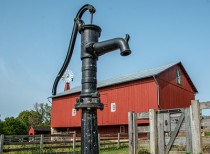 3)  Christ’s tomb is sealed with a rock and from that tomb springs forth life which flows into all the world;

4) the connection between the Wisdom and Word of God which turn out both to be references to Christ.

It is significant, I think, that when the soldier pierces Christ’s side with a spear, water springs forth (John 19:34) just as water flowed from the miraculous rock which accompanied Israel in the desert when the rock was struck by Moses’ rod. Christ is the giver of the living water which unlike normal H2O  quenches thirst forever: “Every one who drinks of this water will thirst again, but whoever drinks of the water that I shall give him will never thirst; the water that I shall give him will become in him a spring of water welling up to eternal life” (John 4:13-14). The imagery reinforces the connection between Christ and the miraculous rock.  There is a life-giving nature to that which flows from Christ in the desert or on the cross. 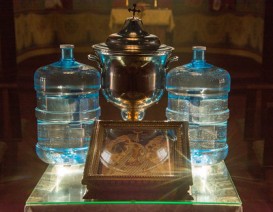 Even before Christians associated Christ with the traveling rock that accompanied Israel through the desert, Israel saw this rock to be a sign of Wisdom. Orthodox scholar Eugen Pentiuc notes:

“… the first century C. E. already had interpreters associating  Wisdom with the ‘traveling rock.’ ‘They [Hebrews] became thirsty and called upon you, and water was given them out of a sharp-edged rock…, and a remedy for [their] thirst… out of hard stone…’ (Wisdom 11:4).

Since, in Paul’s view, Christ assumes the role of Wisdom (1 Corinthians 1:24, 30), the association in 1 Corinthians 10:4 of Christ with the ‘traveling rock’ could just be another variant of a Jewish-Hellenistic theme. However, as Fisk notes, the Pauline equation was probably motivated by reading the Song of Moses in Deuteronomy 32 (cf. Ps 81:16 [80:17] LXX: petras, ‘rock’), where the living God is depicted as Israel’s ‘rock’…”  (HEARING THE SCRIPTURES, p 170) 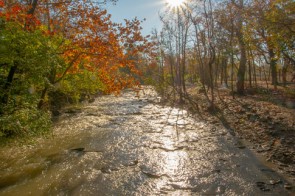 It is the Christians who understood Christ to be the Wisdom of God who then come to believe the traveling rock of the Exodus story is actually Christ our God traveling with Israel during their desert sojourn and supplying their spiritual needs. Again, Pentiuc comments:

The same divine, creative Wisdom who shared a free banquet (Proverbs 8-9) on Holy Thursday through a self-offering is now entering the tomb, pouring streams of life to the ones held in captivity as far as the ‘impenetrable, innermost parts‘ of Hades (Wisdom 17: 4-5, 14-15). There is no noise of battle, no clash of weapons, only streams of life flooding the realm of corruption, evil, and death. A victory with no battle, just an irresistible invasion of goodness, light, and life that brings Hades to its final chapter.   (HEARING THE SCRIPTURES, p 228) 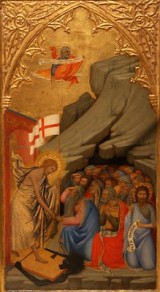 God’s overwhelming victory over sin and death is not a battle between equals, and there is no battle with an uncertain outcome.  God overwhelms Hades and brings life to all those being held captive by Death.  God is establishing His Kingdom over all.  From Christ’s tomb carved from stone (Matthew 27:60) comes the waters of immortality—another connection between the miraculous rock and Christ.

“It is done! I am the Alpha and the Omega, the beginning and the end. To the thirsty I will give from the fountain of the water of life without payment.” (Revelation 21:6)

In the next post we take a look at the Old Testament story of the miraculous rock which accompanied Israel in its sojourn through the desert and how the Jewish tradition valued this story.

Next: Christ the Water-giving Rock (II)