Peter was therefore kept in prison, but constant prayer was offered to God for him by the church. And when Herod was about to bring him out, that night Peter was sleeping, bound with two chains between two soldiers; and the guards before the door were keeping the prison. Now behold, an angel of the Lord stood by him, and a light shone in the prison; and he struck Peter on the side and raised him up, saying, “Arise quickly!” And his chains fell off his hands. Then the angel said to him, “Gird yourself and tie on your sandals”; and so he did. And he said to him, “Put on your garment and follow me.” So he went out and followed him, and did not know that what was done by the angel was real, but thought he was seeing a vision. When they were past the first and the second guard posts, they came to the iron gate that leads to the city, which opened to them of its own accord; and they went out and went down one street, and immediately the angel departed from him. And when Peter had come to himself, he said, “Now I know for certain that the Lord has sent His angel, and has delivered me from the hand of Herod and from all the expectation of the Jewish people.” (Acts 12:5-11)

Peter like all of the apostles did not live a privileged life, free from trials and tribulations. Rather, he like all disciples had to deal with the fact that though the Good News of salvation was now available to all, Christians still had to live in a world under the power of sin. He had to contemplate whether his own arrest and imprisonment was in fact him doing God’s will or whether he in fact was suffering for no reason. When God rescued him from prison, Peter was not even sure it was really happening, he had to come to his senses before realizing what the truth was. 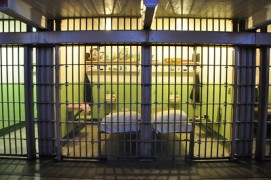 “… During the very times when losses occur and crises strike, the opportunity is especially present for us to realize how much God is at the center of our lives, at the heart of ourselves, and on the horizon of our destiny in new, refreshing ways. Until then, the covenant we have with God may be vague, a mere backdrop, or practically forgotten. It isn’t the deep relationship implied by the word covenant. A crisis or loss can shake the dust of denial off of our possibly childish relationship with the Lord; it can remind us of our vulnerability and dependence on the creator and cut through the massive games of pseudo-independence we have played. Our first response to this shaking may well be to cry out in anguish, shock, anxiety, impatience, and indignation at our tragedy.

..We may doubt God’s presence in our lives. At times such as these, we can also become angry about what we perceive as the hide-and-seek game we believe God is playing with us at the very time when we feel a dramatic need for that divine presence. As a matter of fact, if we are really being honest with ourselves, at times like these, we may question whether a God exists at all. Henri Nouwen recognizes this tendency toward doubt about God when facing a crisis and the role “secularization” plays in it. He notes:

‘It is very simplistic to say that emergencies make people pay more attention to God and reawaken religious feelings. We might in fact wonder if the opposite is not more often the case. Fear and anger do not lead to God. The great pressures of our time have created much bitterness, resentment, and hatred. Many people have turned away from God and prayer since they no longer see how they can pray to a God who allows so much cruelty, so much agony, so much pain…. We listen to lectures affirming the importance of prayer, but we really think that our people need actions and not prayer and that prayer and praying is good when you really have nothing else to do. I wonder if under the surface of our religiosity we do not have great doubts about God’s effectiveness in our world, about his interest in us—yes, even about his presence among us. I wonder if many of us are not plagued by deep, hostile feelings toward God and the idea of God without having any way to express them. I even wonder if there are many religious people for whom God is their only concern…. When we speak of our age as a secular age, we must first of all be willing to become aware of how deeply this secularism has entered into our own hearts and how doubt, hesitation, suspicion, anger, and even hatred corrode our relationship with God.’

When a serious crisis arises, we outwardly—or at least inwardly—argue, bargain, express our feelings of abandonment, and become angry or hurt that God is allowing this to happen.

…Expressing anguish, disillusionment and near despair with a deeply felt desire for a return of what we have lost or a return to a pre-crisis state is natural. I feel, as many others do, that expressing initial strong negative reactions to God during difficult times is not a problem in itself. As a matter of fact, it may be one of the signs of a faith that is real and based on an ongoing relationship with the living God.

The difficulty arises when we don’t move beyond anger and disillusionment with God in order to be open to the possibilities of encountering God in surprising and mysterious ways. The greatest challenge in times of crisis and loss is to be willing to be open to receive love in new ways, possibly from different sources at unexpected times.

Within the tragedy of a loss or crisis there is a real possibility to move away from the limited God we have created, and a life we may be merely existing within, to an experience of God and life that can be real and transforming in nature. Still, admitting this and believing it at such a deep level that one can boldly act upon it are two completely different things! A life of true covenant is simple… but not easy.

How do you reconcile an all-loving God with the tragedy and suffering that seem so pervasive in our lives and our world? (Robert J. Wicks, SPIRITUAL RESILIENCE)

Indeed, He is risen!