When the Lord Jesus claimed that those who keep His word shall never see death, He was proclaiming a spiritual truth which cannot be understood only in a literal way. For Christ Himself will die as do all of His disciples and followers.  What I think He means is that we will not see death because Christ Himself has filled Hades/Sheol with Himself.   When we die, we won’t see [the face of] death because Christ now fills all things causing death to vanish. When we die, we shall see the face of our Savior.

As God, you arose from the tomb in glory, raising the world with yourself. Human nature praises you as God, for death has vanished; Adam exults, O Master; Eve rejoices, for she is freed from bondage, and cries to you: ‘You are the giver of resurrection to all, O Christ!’ (Tone 1, Kontakion)

As the Psalmist says there is no place we can go where God is not:

Where shall I go from your Spirit?

Or where shall I flee from your presence?

If I ascend to heaven, you are there!

If I make my bed in Sheol, you are there! 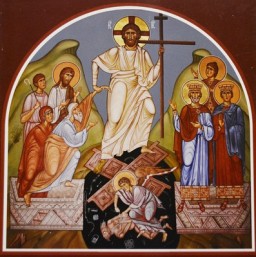 And, as we sing at Pascha:

Now all things are filled with light: heaven and earth, and the nethermost regions. So let all creation celebrate the Resurrection of Christ, whereby it is established. (Paschal Canon Ode 3)

Christ has filled everything including the nethermost regions of the cosmos- Hades/hell/Sheol- with Light, namely with Himself.  Now even when we go to the place of the dead we see the Light of Christ as death has vanished. This is the Good News of Jesus Christ. We do not need to fear death. In the Lamentations service of Holy Friday, we chant these words:

To earth have you come down, O Master to save Adam,

And not finding him on Earth

You descended into hell, seeking him there. 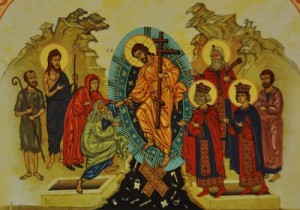 Of old the lamb was sacrificed in secret;

But You, longsuffering Lord, were sacrificed beneath the open sky

And have cleansed the whole creation.

Adam was afraid when God walked in Paradise,

But now he rejoices when God descends to hell.

Then he fell, now he is raised up.

God is not absent from the place of the dead, but is everywhere present and fills all things including Hades. As the above hymn envisions it, while Adam was afraid to see God in Paradise (Genesis 3:10), Adam rejoiced to see God in Hell for now it meant his salvation. For us who still face death, we won’t see death as long as we are looking for Christ. In the book of Revelation Death is permanently thrown into the lake of fire and eliminated from the cosmos:

Then Death and Hades were thrown into the lake of fire. . . . Then I saw a new heaven and a new earth; for the first heaven and the first earth had passed away, and the sea was no more. And I saw the holy city, new Jerusalem, coming down out of heaven from God, prepared as a bride adorned for her husband; and I heard a loud voice from the throne saying, “Behold, the dwelling of God is with men. He will dwell with them, and they shall be his people, and God himself will be with them; he will wipe away every tear from their eyes, and death shall be no more, neither shall there be mourning nor crying nor pain any more, for the former things have passed away.” (Revelation 20:14-21:4; emphases added)

[It is very clear that Death is God’s enemy; God’s last enemy according to St Paul in 1 Corinthians 15:26. The fact that Russian Orthodox Patriarch Kirill and the Russian Orthodox Synod have blessed the killing of Russians and Ukrainians in Putin’s war shows us in the spiritual realm whose side they are on. Not only have they blessed the murders of innocent people, but they would claim many of these people belong to ‘their’ flock so they are guilty like Cain of fratricide. They bring disgrace on all of Christianity because they choose to be nationalists rather than Christian.  Jesus, the Good Shepherd distinguishes Himself from the bad shepherds who are nothing but thieves:  “The thief comes only to steal and kill and destroy; I came that they may have life, and have it abundantly” (John 10:10).  Patriarch Kirill and his synod (like thieves) are blessing killing and destruction in opposition to Christ who gives life in abundance.   Two thoughts from the Word of God for Kirill and the Russian bishops:

For this is the message which you have heard from the beginning, that we should love one another, and not be like Cain who was of the evil one and murdered his brother. And why did he murder him? Because his own deeds were evil and his brother’s righteous. (1 John 3:11-12)

You are of your father the devil, and your will is to do your father’s desires. He was a murderer from the beginning, and has nothing to do with the truth, because there is no truth in him. When he lies, he speaks according to his own nature, for he is a liar and the father of lies. (John 8:44)

While Orthodox are rejoicing in Pascha that Christ is trampling down death, sadly Kirill and his synod are guilty of blessing and advocating death.]

Truly, He is risen!