For we did not follow cunningly devised fables when we made known to you the power and coming of our Lord Jesus Christ, but were eyewitnesses of His majesty. For He received from God the Father honor and glory when such a voice came to Him from the Excellent Glory: “This is My beloved Son, in whom I am well pleased.” And we heard this voice which came from heaven when we were with Him on the holy mountain. And so we have the prophetic word confirmed, which you do well to heed as a light that shines in a dark place, until the day dawns and the morning star rises in your hearts…  (2 Peter 1:16-19) 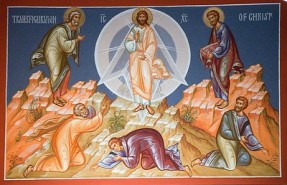 The 14th Century Sicilian writer now called Pseudo-John Chrysostom (his writings were published as if sermons by St John Chrysostom, but were written 1000 years after Chrysostom died) says of the Feast of the Transfiguration:

And if we desire to be nourished by these gifts, let us make our way with Peter and John and James, the apostles of Christ, so that by grasping hold of Christ in faith and worshiping him, we might be worthy to become spiritual companions of theirs on the way, and come to the divine summit, as if on the top of mount Thabor.  . . .  Therefore ‘his face shone like the sun,’ as the disciples say, ‘and his garments become white as light,’ as far as the disciples were able to see. And why did he appear to them this way? To show them that the Lord of all things had put on the whole Adam and had wiped him clean of sin, and had whitened what had become scarlet in Adam’s descendants. And having cleansed him from all stain, he showed him to his own disciples, being transfigured then on the mountain to be as Adam was when he had just been formed. For this is how Adam was before his disobedience, just as Christ appeared in his transfiguration; And this was the reason Christ appeared in this way. (LIGHT ON THE MOUNTAIN, p 320) 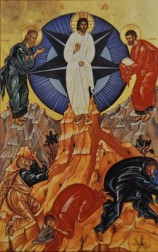 A Footnote in the book says of these comments: “This interpretation of Jesus transfigured human form, as a restoration of the original appearance of Adam and Eve before the fall—and thus a full revival of human nature as it was meant to be—appears to be a new theme in the tradition of preaching on this event.” [Which shows that the Tradition continued to be creative in plumbing the depths of Scripture for its meaning – still able to come up with a new sermon idea even after 1400 of preaching on the event.] It appears that this 14th Century author was the first to connect the ancient belief that Adam and Eve were clothed in glorious garments in Paradise with the transfiguration of Christ’s garments at the Transfiguration. He sees Christ’s face shining like the sun and the garments becoming white as light to be Christ revealing what Adam and Eve were like before the Fall—at the Transfiguration Christ shows that humanity has been forgiven and restored to its original God-given glory. Thus, in the Transfiguration  Christ is showing redeemed humanity in Himself: God already re-united to humanity.  Christ in His very person  reveals that salvation is fully given to us humans.