Now while they were staying in Galilee, Jesus said to them, “The Son of Man is about to be betrayed into the hands of men, and they will kill Him, and the third day He will be raised up.” And they were exceedingly sorrowful. (Matthew 17:22-23)

There are some texts in Scripture which I gloss over as a I read them because they seem familiar and unexciting and then suddenly something in the text jumps off the page to me.  The above text from Matthew’s Gospel is one of those.  It is after Christ tells His disciples that “the Son of Man” will be raised up on the third day after His death that the disciples react by becoming “exceedingly sorrowful.”  Apparently all they could understand was Christ predicting His own death, but His promise to be raised up didn’t mean anything to them and so couldn’t overcome their sorrow at hearing Him prophesy His own death.

For us, 2000 years after the Resurrection, Christ’s words have a particular meaning, especially for those of us who have celebrated Pascha at midnight.  There is a joy and an awe, but no sorrow.  The disciples were walking with Jesus before His death and resurrection, and it is obvious that Christ’s reference to being ‘raised up’ did not mean much to the disciples.  They were troubled and grieved by hearing of His betrayal and execution.  [I assume they understood Christ’s reference to the “Son of Man” as a way that He referred to Himself, but maybe even that was not clear to them.] They no doubt were well aware that the Jewish leadership had become increasingly antagonistic towards Jesus and His disciples. So they probably understood that something bad was brewing against their Master which was dashing their hopes that He was the Messiah.  They are hoping that Jesus is the Messiah and that the times of trial and tribulation on earth are coming to an end, and yet Jesus appears to be talking about His own demise, not the end of oppression for the Jews. [Remember also Peter rebuking Jesus for His talking about His impending death (Matthew 16:22), and Thomas gloomily saying they should go up to Jerusalem to die with Christ (John 11:16) after Jesus announces He is going to Jerusalem to awaken Lazarus (another resurrection reference the disciples didn’t understand).]

Christ is giving them some bad news, but then He ends His statement with reference to being raised up, which we understand as hopeful, but it didn’t sound so to the Twelve disciples. There are some hymns in the Orthodox Church which do claim that Jesus was trying to prepare the Twelve for His arrest and execution.  For example, the Kontakion of the Transfiguration says:

On the Mountain You were Transfigured, O Christ God, and Your disciples beheld Your glory as far as they could see it; so that when they would behold You crucified, they would understand that Your suffering was voluntary, and would proclaim to the world, that You are truly the Radiance of the Father!

The Transfiguration is heralded as an event to help the disciples get through the days following Christ’s crucifixion.  Jesus was showing them that He is Lord, and as Lord goes to His voluntary death for the salvation of the world. They only needed to keep faith in Him and trust Him despite what events might unfold.

Poet Paul Laurence Dunbar once wrote about time as being a possible healer for our pains:

The past which held its share of bitter pain, 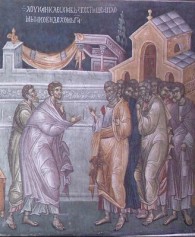 It does happen for the disciples that their time of grief is replaced by a time of rejoicing as they came to understand the resurrection as God defeating death and revealing that Jesus truly is the Christ. Indeed their sorrow and doubt was exorcised by the passing of time and their growing comprehension of the resurrection. Their sorrow was turning into joy as Jesus promised them:

Truly, truly, I say to you, you will weep and lament, but the world will rejoice; you will be sorrowful, but your sorrow will turn into joy. When a woman is in travail she has sorrow, because her hour has come; but when she is delivered of the child, she no longer remembers the anguish, for joy that a child is born into the world. So you have sorrow now, but I will see you again and your hearts will rejoice, and no one will take your joy from you. (John 16:20-22) 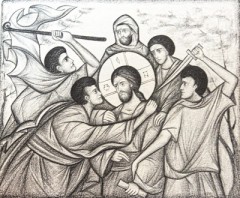 The disciple’s grief forced them to contemplate the events that were unfolding before them.  Their hope was turning into sorrow, but that sorrow would eventually turn into an everlasting joy. It would just take time for this to happen.

When the Women Disciples of the Lord learned from the angel the joyous message of Your Resurrection, they cast away the ancestral curse and elatedly told the Apostles: Death is overthrown! Christ God is risen, granting the world great mercy! (Tone 4 Resurrectional Troparion)