Then Jesus, being filled with the Holy Spirit, returned from the Jordan and was led by the Spirit into the wilderness, being tempted for forty days by the devil. And in those days He ate nothing, and afterward, when they had ended, He was hungry. And the devil said to Him, “If You are the Son of God, command this stone to become bread.” But Jesus answered him, saying, “It is written, ‘Man shall not live by bread alone, but by every word of God.’” (Luke 4:1-4)

For though we live in the world we are not carrying on a worldly war, for the weapons of our warfare are not worldly but have divine power to destroy strongholds. We destroy arguments and every proud obstacle to the knowledge of God, and take every thought captive to obey Christ… (2 Corinthians 10:3-5) 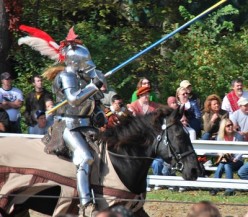 Finally, be strong in the Lord and in the strength of his might. Put on the whole armor of God, that you may be able to stand against the wiles of the devil. For we are not contending against flesh and blood, but against the principalities, against the powers, against the world rulers of this present darkness, against the spiritual hosts of wickedness in the heavenly places. (Ephesians 6:10-12)

St Ephrem the Syrian in his poetry speaks about Christ being tempted by the devil. For Ephrem Christ is humble, having emptied Himself to become incarnate as a human, making Himself the lowly One. Satan exalts himself in pride but is overthrown by the humble Christ. 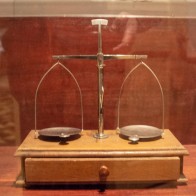 Up onto the high mountain Satan led the lowly One;

upon the height he set Him up.

There, as if in a balance, were weighed

The proud one was justly overthrown;

the Lowly One, exalted, overthrew him.

On the mountain Satan tempted our Lord [with kingship].

And in mockery he gave Him [as king] to the Gentiles.

[Ephrem sees the spiritual warfare as a battle between humility (Christ) and pride (Satan). The imagery of who is highly exalted is wonderfully mixed up with Satan leading Christ up a mountain as if this will glorify Christ and cause Him to want to abandon lowly humility for a more (proper) position of aggrandizement. Christ doesn’t ‘fall’ for Satan’s ruse.]

The arrow he shot at You was the bread for which he asked,

symbol of the greed of Adam.

With bread he tempted the Sustainer of all,

Who by His fasting healed gluttony.

. . .  the bridegroom was reclining

He who did not want to change stones

[Ephrem portrays the spiritual warfare – Satan’s arrow is his demand that Christ change a stone into bread. Ephrem relates this demand for food to Adam’s own greed in eating the forbidden fruit. Christ as God is the nurturer of all, and needs no wheat bread to sustain Him. Christ instead fasts by refusing to obey Satan instead of creating bread out of stone to feed Himself – which may have become another argument for fasting among the monks. Jesus will later change water into wine, and will miraculously feed the 5000 with bread, but He refuses to serve Himself if that means obeying Satan.]

The evil one thought that [Jesus], cast down from the height,

would fall and cease to exist.

He provoked Him to cast Himself down since he thought

that from fright He did not allow Himself

to fall from the top of the Temple.

But since He rejected him and did not fall,

the evil one fell from his height—unforced, 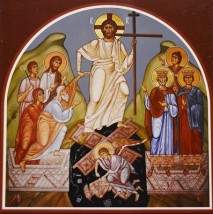 [For Ephrem, keeping to the imagery of being up in a mountain, reveals Satan as believing if Christ threw Himself off the mountain this would somehow so humble Christ that He would disappear. Satan obviously does not understand either God or the incarnation – God’s emptying and humbling His divine person. Satan believes that perhaps Christ is afraid to throw Himself off the top of the temple. But in Christ refusing to obey Satan it is Satan who is thrown off his position of pride and caused to fall into defeat and humiliation. God has no fear of being humble for God does not see humility or humiliation as demoting Himself. This is something Satan can never comprehend.]