Now as they went on their way, he entered a village; and a woman named Martha received him into her house. And she had a sister called Mary, who sat at the Lord’s feet and listened to his teaching. But Martha was distracted with much serving; and she went to him and said, “Lord, do you not care that my sister has left me to serve alone? Tell her then to help me.” 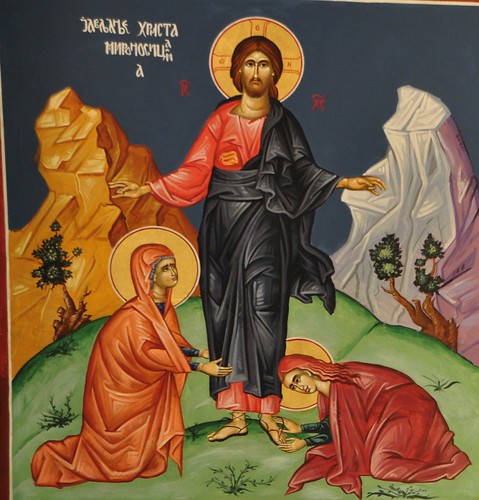 But the Lord answered her, “Martha, Martha, you are anxious and troubled about many things; one thing is needful. Mary has chosen the good portion, which shall not be taken away from her.”   (Luke 10:38-42; the Gospel lesson for the Nativity of the Theotokos)

Understand that Martha represents active virtue, while Mary represents divine vision. Action entails distractions and disturbances, but divine vision, having become the ruler of the passions (for Maria means mistress, she who rules), devotes itself entirely to the contemplation of the divine words and judgements…therefore, whoever sits at the feet of Jesus, that is, whoever steadfastly follows and imitates Jesus, is established in all active virtue. Then such a man will also come to the listening of the divine words, that is, he will attain to divine vision. Mary first sat, and by doing this she was then able to listen to Jesus’ words. 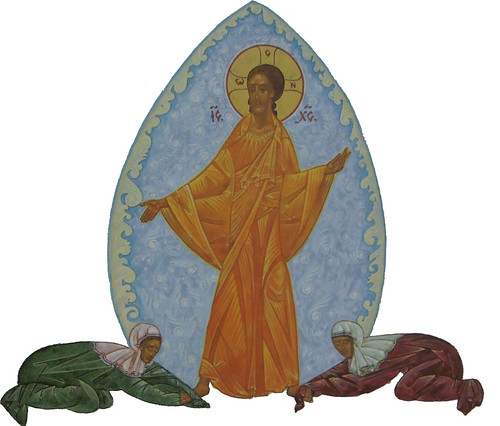 Therefore you also, O reader, if you have the strength, ascend to the rank of Mary: become the mistress of your passions, and attain to divine vision.  But if you do not have the strength, be Martha, and devote yourself to active virtue, and by this means welcome Christ.

Each August 15, we Orthodox celebrate as a Feast the Dormition of the Theotokos: the event of the death of Mary, Mother of God.   Her death is celebrated in faith as her translation from the world to life in the world to come.  For Orthodoxy does believe that those who are united to Christ are deified by the incarnate God.  Union with Christ is salvation.  Mary is the subject of much theological reflection which is expressed in the liturgical poetry of the Church.  In Mary, truth and beauty reside together for the salvation of the world. 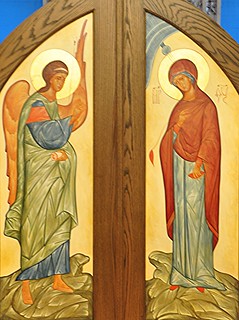 “The single most important source concerning the Virgin Mary and her place in God’s redemption is found already in the second century designation of Mary as the New Eve or the Second Eve. This idea was introduced by the first Christian philosopher and theologian Justin the Martyr, and developed by Irenaeus especially. Irenaeus’ elaboration of the contrast between the two virgins, Eve and Mary, is of profound soteriological significance and illustrates Mary’s role in the history of salvation. This contrast symbolizes two possible uses of created freedom by man: in their first, a surrender to the devil’s offer of false deification; in the second, humble acceptance of the will of God. The Old Testament is the history of the preparation of the human race for the coming of Christ, a story in which human freedom is constantly put to the test by God. All of the sacred history and tradition of the Jews is the tale of the slow and laborious journey of fallen humanity toward the fullness of time. In the entire Patristic Tradition the Virgin Mary is viewed as the goal of Old Testament history, which began with the children of Eve.[…]

The election of the Virgin Mary is therefore the culmination point of Israel’s progress toward reconciliation with God, but God’s final response to this progress and the beginning of new life comes with the Incarnation of the Word, because man’s salvation could be realized only by God, His sinless Son. The answer of Mary to the angelic annunciation, ‘Behold the handmaid of the Lord; be it unto me according to thy word’ (Lk. 1:38), resolves the tragic problem of fallen humanity. All that God required of human liberty since the Fall is accomplished: conformity of human will and purpose to the Divine Will and Purpose. Divine Will is accepted and responded to. And this human response is highly relevant at this point. The obedience of Mary counter-balances the disobedience of Eve. And now the work of redemption, which only the sinless Incarnate Word can effect, may take place.” (Constantine N. Tsirpanlis, Introduction to Eastern Patristic Thought and Orthodox Theology, pp 53-54)

The Virgin Mary is significant for the salvation of each of us, for in her the union of God and humanity took place, healing a division which had separated the Creator from His creation from the time of the first sin of Eve and Adam.   So Mary is the focus of poetry and love in the Orthodox tradition.  Here is a portion of a poem in the Ethiopian Orthodox tradition from about the 15th Century:

That House visited by God,

Whose greatness is inexpressible

Whose beautiful appearance is ineffable,

It was for you that the prophets of Israel

Built up their tower of prophecy.

O Holy One, set me back firmly

In the discipleship of your beloved Son. 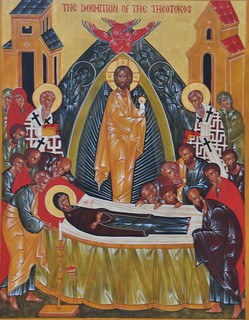 The Dormition of the Virgin Mary is not an event mentioned in the New Testament.  For all Feasts in the Church there are assigned Scriptural readings for the Feast.   Like the other major Orthodox feasts centered on the Theotokos, the scripture readings for the Feast of the Dormition are not about the event being celebrated, but were selected for other reasons.  A Gospel lesson is proclaimed through the Feast.   Bishop Job (Getcha) offers an explanatory note about how the readings for Mary’s Feasts were chosen: 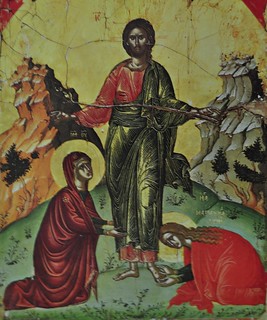 The Gospel lesson from Luke mentions “Mary” but in this case not the Lord’s Mother, but Mary, sister of Martha.   The selection of this reading is not accidental.  In both ancient Jewish and early Christian scriptural interpretation, one method  used to explicate a text relies on a “word list” approach to interpreting a passage.  Basically this method takes one word in a biblical passage and then uses other biblical passages where the exact same word occurs to interpret the text.  From a modern point of view we might point out that there is absolutely no logical connection between the texts except that one word appears in both passages.  But since the ancients assumed the Scripture being inspired by God was arranged by God, they concluded there are no accidental or coincidental occurrences of words in the bible.  So they would carefully consider what the relationship between two otherwise unrelated texts must be if they both contain the same significant word.   The reference to “Mary” in Luke 10:38-42 is enough to use this passage in reference to Mary, the Theotokos.  As Dr. Pelikan noted above both sisters Martha and Mary are seen as types of the Virgin Mother of Christ.

Thus simply attending the festal liturgies of the church and listening to the Scripture readings already puts us in touch with the mind of the ancient Christians!  We come to experience the depth and riches they saw in all Scripture passages, and the treasury they represent in helping us to know God.

The Gospel reading for the Liturgy of many Marian Feasts includes the verses from Luke 10:38-42.  This is true of the The feast of the Nativity of the Theotokos  celebrated on September 8 in the Orthodox Church.  This Gospel lessons reads:

Now it happened as they went that He entered a certain village; and a certain woman named Martha welcomed Him into her house. And she had a sister called Mary, who also sat at Jesus’ feet and heard His word. But Martha was distracted with much serving, and she approached Him and said, “Lord, do You not care that my sister has left me to serve alone? Therefore tell her to help me.” And Jesus answered and said to her, “Martha, Martha, you are worried and troubled about many things. But one thing is needed, and Mary has chosen that good part, which will not be taken away from her.

Fr. Lev Gillet offers some comments that help illuminate the Gospel’s lesson for us all.

“Jesus eludes those who want to make Him king. He is unwilling to give His opinion about the conflicts between Israel and Caesar. He refuses to help a man who asks Him this, in a disagreement about inheritance. He who has come to cut the roots by which these things hold us captive, would not encourage us in our search for them. ‘One thing is necessary.’ Mary left all things in order to listen to the word: she has chosen ‘the best part.’ And yet the word can be expressed in every earthly question provided that it is the Saviour’s word which we look for in it.  In this way human questions are transformed in Christ. Let us consider Martha and Mary. Jesus does not blame Martha for attending to domestic cares. What He reproaches her for is for being ‘careful’ and ‘troubled’ about ‘many things.’ She allows herself to be distracted from hearing the word. But it is possible, in the midst of inevitable daily preoccupations, even while serving, to sit down, as it were, at the Lord’s feet and listen to Him. The most intense activity does not exclude a glance in the Saviour’s direction, cast directly on Jesus. If Martha had realized it, she would have – without stopping to serve – chosen the best part – no less than Mary had done.” (A Monk of the Eastern Church, Jesus: A Dialogue with the Saviour, pgs. 52-53)

See also the blog The Nativity of the Theotokos (2013)